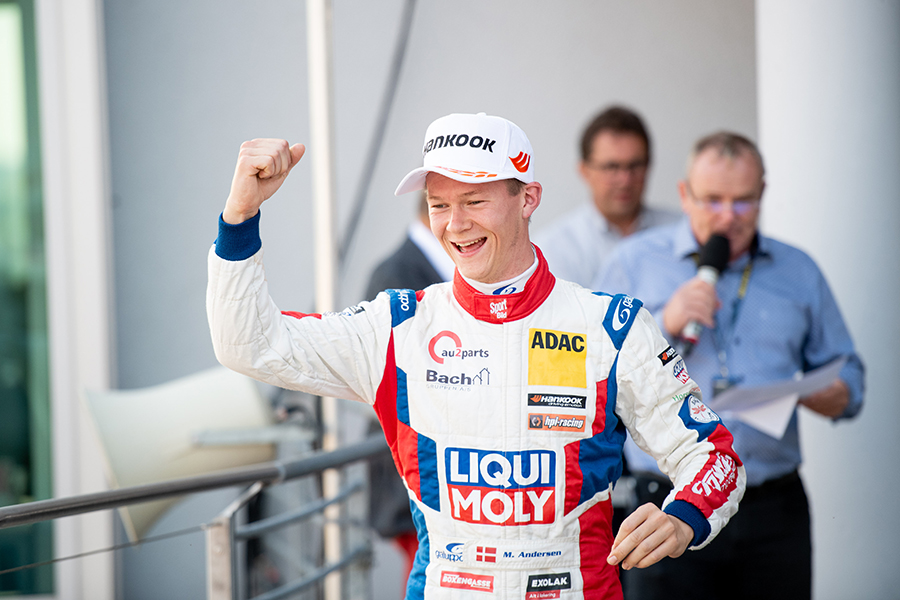 Martin Andersen clinched the ADAC TCR Germany title with a dominant performance in the season’s penultimate event at the Sachsenring. The Dane and his Engstler Motorsport Honda Civic Type R scored the maximum points on offer, claiming two pole positions and two lights-to-flag wins. Andersen’s lead in the standings grew up to 91 points over Jessica Bäckman, when 70 will be at stake in the last event at Hockenheim on 21/23 October.

Race 1 – Andersen started well from the pole ahead of Bäckman, while Karklys stalled from P3 and Kircher squeezed between the Lithuanian’s car and the pit wall. During the first lap, Bäckman made a mistake and was passed by Ładniak, Kircher and Langeveld.

Andersen increased his lead; behind him Bäckman closed in on Langeveld, while Kircher was chasing Ładniak and pushed him wide to pass at the end of lap 13. The Stewards ordered Kircher to fell behind the Pole who had dropped to fifth after the incident, and so Kircher slowed to let Langeveld, Bäckman and Ładniak through.

With only one minute remaining, Hertner crashed into the wall and the red flag was waved. Andersen won by 12 seconds ahead of Langeveld who gave the Maurer Motorsport Holden Astra its best result so far, with Bäckman third ahead of Kircher and Karklys who completed a brilliant recovery after stalling at the start.

Race 2 – Andersen was on pole once again and led the field at the start, while Bäckman moved up to second and was chased by Karklys and Langeveld who were fifth and sixth on the grid; Kircher was slow from P2 and dropped to fifth ahead of Ładniak. Throughout the whole race, Bäckman and Karklys followed the leader, but never came within striking distance. Andersen was in control and cruised to his sixth consecutive victory, the seventh in the season so far, 1.9 seconds ahead of Bäckman, while Karklys resisted Langeveld’s assault to take third.