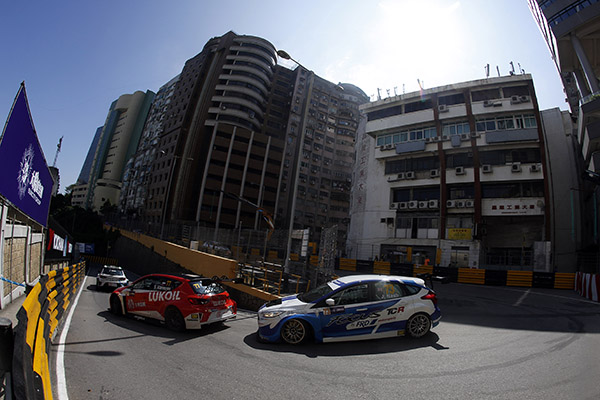 Works in progress in the TCR garages

Teams of the TCR International Series are at work to prepare their cars for tomorrow morning’s qualifying session.
Most of the outfits are only adjusting the set up, however some others have more work after their drivers hit troubles during today’s second practice.
Both Opel Astra cars of Campos Racing are under care. Josh Files’ suffered from extensive damage when it crashed at the Mandarin bend during Thursday’s Practice 1. The team has already replaced the rear suspension, now they have contacted the local Opel dealer to find a spare front sub-frame. At the same time they are trying to solve a water pump problem on Dan Wells’ sister car.
Works are in progress on James Nash’s Ford Focus that ran into cooling problems. The team suspects these were due to the intercooler.
Target Competition and Niza Racing have already fixed the damage suffered by Keith Chan’s and Douglas Khoo’s SEAT cars in two different accidents.
As for Alain Menu’s Subaru, it was withdrawn from the meeting. The Top Run team tried everything to make the car running again. They opened the engine and found that brasses and connecting rods had caused the seizure. Afterwards, they contacted the Subaru dealers in Macau and Hong Kong for the spare parts, but to no avail.