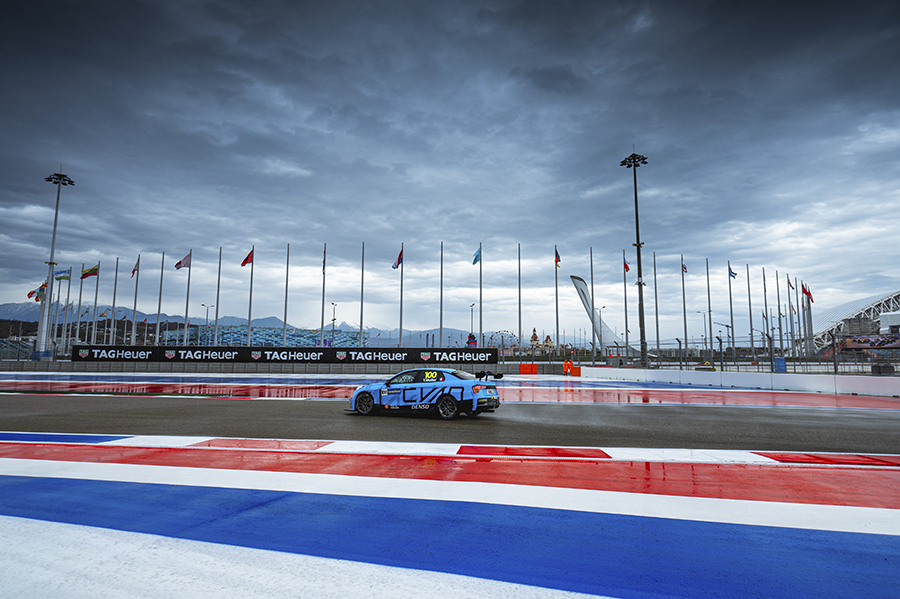 Yvan Muller has taken pole position for the final round of the 2021 WTCR at Sochi Autodrom. The Cyan Racing Lynk & Co driver will start ahead of the CUPRA of Mikel Azcona, and the Honda of Néstor Girolami.
The session started in wet and slippery conditions, with Muller leading the way in Q1, adapting to the Russian circuit quickly.
Points leader Yann Ehrlacher ended the session seventh, while his nearest title rival Frédéric Vervisch just made the cut with a last-minute improvement, switching back to wet tyres, after trying to run with slicks on the front, which proved to be the wrong call.
In Q2, Ehrlacher led the way ahead of Nathanaël Berthon’s Audi, while title contenders Vervisch and Esteban Guerrieri both missed the top five shootout and will start ninth and sixth for the second race on Sunday.
Jean-Karl Vernay could only qualify in eighth and hasn’t scored the points necessary to keep him in the championship hunt, with is now down to five contenders.
Muller aborted his first run and went out on slick front tyres for one last lap, getting out of the drop zone and going fourth fastest and into the shootout, while knocking team-mate and title contender Santiago Urrutia was out of the top ten.
In the Q3 shootout, Ehrlacher elected to go out first, and his time of 2:31.887 was too conservative, with every car improving throughout the session.
His team-mate and uncle Yvan Muller going fastest of all with a 2:29.624, eventually just over three-tenths of a second faster than Azcona’s CUPRA, with Münnich Motorsport Honda driver Néstor Girolami third fastest.
The two LADA Vesta Sport cars of guest drivers Kirill Ladygin and Mikhail Mityaev qualified at the back of the field in 20th and 21st positions.
With five points for pole position, Muller moves up to fourth in the standings ahead of Urrutia.
Ehrlacher meanwhile has extended his lead in the championship to 37 points over Vervisch and has a good chance of securing the title in tomorrow’s Race 1.
Tiago Monteiro missed all running on Saturday; the Portuguese driver felt unwell and has gone to the hospital for tests.
The first race is scheduled for 12:15 local time (10:15 CET) tomorrow with the Comtoyou Racing Audi cars of Gilles Magnus and Vervisch filling the front row of the reversed grid, while Race 2 will start at 14:15 (12:15 CET).