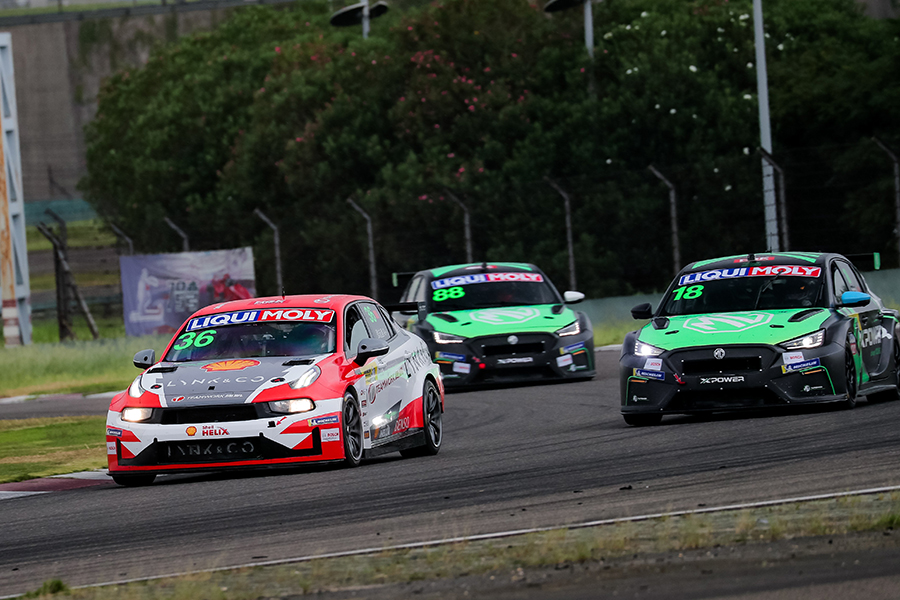 Zhang Zhi Qiang and Martin Cao Hong Wei won the first two races of the TCR Asia and TCR China double-header at the Zhuzhou International Circuit, with Zhang winning an eventful first race in his Teamwork Motorsport Lynk & Co 03, while Cao scored MG’s first win of the season in Race 2.
In Race 1, Zhang started from pole position and led the way into Turn 1, while his teammate Ma Qing Hua was straight up to second behind him. There was trouble at the back as the Volkswagen of Qiu Wen Tao spun around the rival Golf GTI of Mai Yi Bo, which brought out the safety car on lap one.
The race restarted on lap 6, with Cao on the attack for second, but the MG XPower driver collided with Ma at the exit of Turn 2. Ma was turned around, while Cao’s car had broken front-right suspension and stopped on circuit – and the safety car was out again. The race resumed on lap 9, and Zhang pulled away to take an easy path to victory. Rodolfo Ávila would finish third on the road and secure the TCR China class victory.
Sunny Wong Yat Shing was on course for fourth for Teamwork Motorsport but was spun around at the last corner after contact involving the two MG cars of Wang Tao and Zhang Zhen Dong, with Zhang taking fourth, and Wong dropping down to 13th. Ma crossed the line seventh overall, completing a strong recovery after having fallen to 16th after the incident with Cao.
In Race 2, Sunny Wong leapt from second at the start to take the overall lead, while Ma went from seventh on the grid to third by the first corner. Ma quickly dispatched the Super Cup car between him and Wong at the corkscrew, but as he closed on Wong, Ma was passed by Ávila’s MG at the hairpin for second position, with Ávila quickly taking over the lead from Wong at the start of lap two.
Ma then put a move on both Wong and Ávila and snatched the lead. Wong soon fell back from the lead group, also letting his teammate Zhang Zhi Qiang through into fourth before an incident dropped him to the mid-field. The safety car was out on lap four as the two 326 Racing Team Audi cars of Liu Zi Chen and Wu Yi Fan collided while battling for eighth – just as Ávila’s MG also stopped on circuit and out of second place, with his car on fire.
The race restarted on lap 9, but Ma was immediately under attack from Cao, with the MG 6 making its way past Ma for the lead after a side-by-side battle through the first sector. Ma let his teammate Zhang through to try and catch the MG, but to no avail. The two drivers swapped back at the finish, with Cao claiming the first overall win for MG in 2021, with Ma and Zhang completing the podium.
Ma continues to lead the championship, but his lead is reduced to 19 points over Zhang, with Z.Speed Audi driver Yang Xiao Wei far behind in third.
Yang leads the TCR China standings by seven points over Ávila and Wang Tao.
Races 3 and 4 will take place tomorrow at 08:45 and 13:25 local times (02:45 and 07:25 CEST); both will be streamed live at www.tcr-series.com.