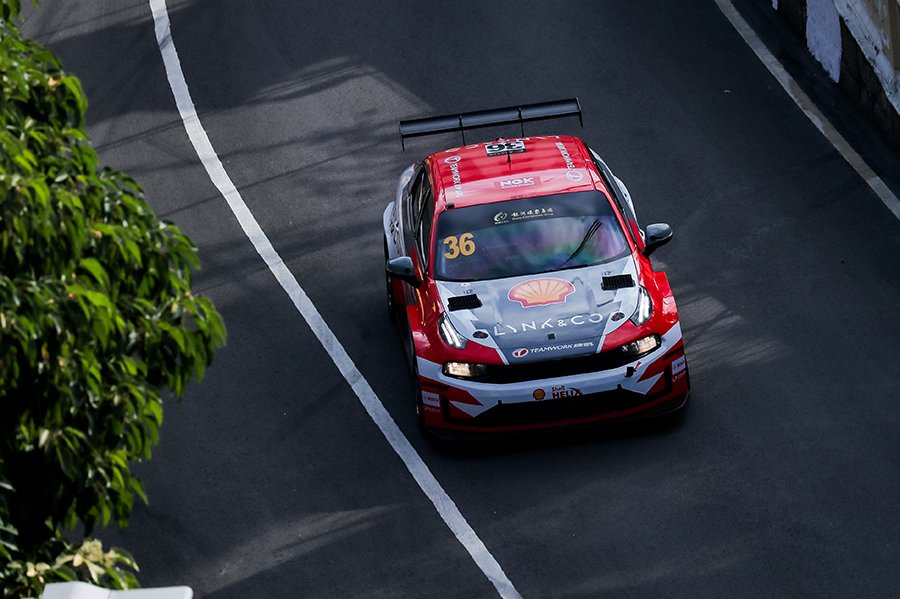 The last race of TCR Asia at Macau was full of drama. Shell Teamwork Lynk & Co’s Zhang Zhi Qiang secured the TCR Asia title and emerged as the winner of the race after his teammate Ma Qing Hua suffered from a flat front tyre during the final lap and finished third behind Lo Sze Ho.
Just like in yesterday’s Race 1, Ma sprinted from the pole to lead the field, while Shell Teamwork third man Sunny Wong made a great getaway from P5 and passed Zhang for second at the Lisboa bend. Zhang returned the move in the same place and retook the second place from Wong at the beginning of lap 2. Lo Sze Ho, Filipe de Souza and Huang Chu Hang followed the three Lynk & Co cars.
Ma had built a gap of nearly five seconds, but in lap three his advantage vanished, and he found himself chased by Zhang, while both de Souza and Huang passed Lo moving up to fourth and fifth. Behind them, Andy Yan advanced to seventh ahead of Jactin Chung, but he crashed against the wall and retired into the pits soon afterwards.
In lap 4, de Souza passed Wong for P3, but Wong immediately managed to retake the position.
In lap 5, Ma lost the lead to Zhang and dropped to third behind Wong, while Chung retired from P7. In lap 7, Huang was forced to pit and lost the fifth position, that was inherited by Mok Tsz Wang who had passed Lo.
Two laps later, Ma resumed his fast pace and jumped back into the lead ahead of Zhang and Wong, the latter was under pressure from de Souza but at the end of lap 10 de Souza was shown the black flagged and returned to the pits.
In the final lap, as Wong dropped with both front tyres flat and Mok stopped on the track, Ma was slowed by a flat front tyre. Zhang seemed set to stay behind his teammate, as the second place granted him the TCR Asia title, but when Lo joined them he was forced to pass Ma and won the race ahead of Lo, while Ma limped to finish third beating Yang Xiao Wei on the line.
After the race, Lo was excluded for an overboost infringement, this promoted Ma and Yang to second and third, while Yiu Lung and Henry Lee were classified fourth and fifth after starting from P13 and P25.